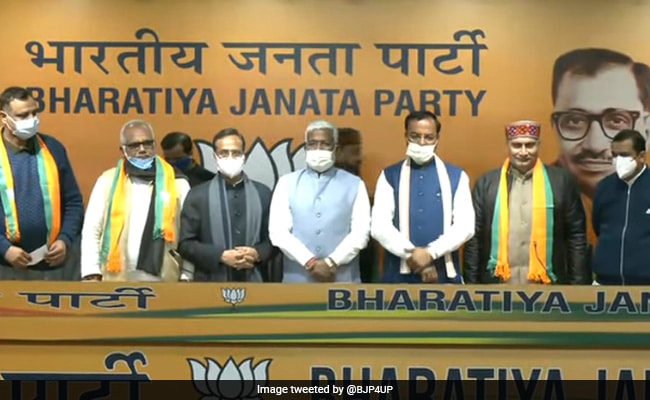 The high-profile exits of two ministers and four MLAs from the Yogi Adityanath government in Uttar Pradesh, less than 30 days before an Assembly election, were followed a day later by two lawmakers – one each from the Congress and the Samajwadi Party – moving the other way, to the ruling BJP.

And, as he did so, the Samajwadi Party’s Hariom Yadav, the MLA from Sirsaganj in UP’s Firozabad, took a cheap shot at (ex) party boss Akhilesh Yadav, accusing him of running “a party of bootlickers”.

“Samajwadi Party is no longer the party of Mulayam Singh Yadav (Akhilesh Yadav’s father). It is a party of bootlickers who have surrounded Akhilesh and want to weaken him,” he told reporters Thursday.

“Ram Gopal Yadav (the Samajwadi Party’s General Secretary and a Rajya Sabha MP) and his son do not want me in the party… they feel I am a threat to their existence,” Hariom Yadav alleged.

Hariom Yadav, who joined the BJP in Delhi on Wednesday in the presence of two UP deputy chief ministers and state unit chief Swatantra Dev Singh, is also Mulayam Yadav’s cousin.

The BJP’s induction of Hariom Yadav and the Congress’ Naresh Saini – the MLA from Saharanpur’s Behat Assembly seat – comes the BJP was hit with six exits in the space of 48 hours this week, including that of ministers Dara Singh Chauhan and Swami Prasad Maurya.

The other four were MLAs – Roshan Lal Verma, Brijesh Prajapati, Bhagwati Sagar and Vinay Shakya, who added to the drama by releasing a statement dismissing ‘abduction’ claims from his daughter.

Their exits were widely seen as having blown a hole in the BJP’s OBC leadership before an election where the party’s main challenger is Akhilesh Yadav, and votes from OBC communities are critical.

None of these have joined the Samajwadi Party, but Akhilesh Yadav’s tweets indicate this will happen.

Mr Yadav has emerged as a major challenger to the BJP’s hopes of re-election.

The Samajwadi Party chief is stitching together an alliance of regional parties, especially non-Yadav OBCs, to take on the BJP, and has spoken of a “pincer” movement to defeat the ruling party.

Senior leaders of a shocked BJP have not really responded as yet, except for appeals from Deputy Chief Minister Keshav Prasad Maurya, who has urged both Mr Maurya and Mr Chauhan to reconsider.

“If any family member strays, it is very sad. I can only appeal to respected leaders… please don’t get on a sinking ship. Big brother Dara Singh, please reconsider,” Keshav Maurya wrote today.

Uttar Pradesh is a politically crucial state and with a Lok Sabha election due in 2024, results here could play a role in the BJP’s bid for an unprecedented third successive general election win.