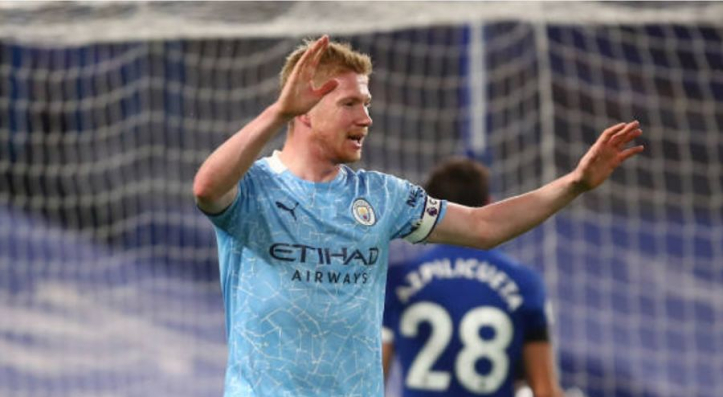 Manchester City look red-hot favourites to win the Premier League as they made it 12 wins in a row over the weekend.

City earned a massive win over Chelsea at the Emirates Stadium as Kevin De Bruyne’s brilliant 70th minute drive earned them a 1-0 win.

That result means that Chelsea‘s ambitions of winning the Premier League are as good as over as they now find themselves 13 points behind leaders City in third place.

The only team who can still hold some hope of catching City is Liverpool, who claimed a confident 3-0 victory at home over Brentford on Sunday.

Fabinho nodded home the opener just before half-time, while Alex Oxlade-Chamberlain and Takumi Minamino added goals in the second period for an under-strength Liverpool side.

Liverpool are 11 points adrift of City in second place but they do have a game in hand and can narrow the gap to eight points.

Fourth-placed West Ham lost 3-2 at home to Leeds on Sunday, with Jack Harrison hitting a hattrick for the Elland Road side.

Tottenham and Arsenal‘s clash was postponed due to COVID but Man Utd failed to take real advantage as they threw away a two-goal lead given to them by Bruno Fernandes’ double to draw 2-2 at Aston Villa.

New loan signing Philippe Coutinho was inspired as a substitute by making one and scoring one for Villa.

View our detailed player statistics for the Premier League at the link below.